Post a topic about yourself to let others know your skills, hobbies, etc.
Post Reply
17 posts • Page 1 of 1

As I stated in topic name. Could this work? Mostly because PAL PM41(2) tends to chirping with ONEchip.

So, to put it simply - use ONEchip for patching BIOS, and Mayumi for handling games.

Does patched BIOS require "SCEA" string? Or is it still "SCEE"?

It should work - the boot ROM patch on the ONEchip is separate from the modchip functions and you can use either of them on their own.

Having said that, I'm not sure it will actually work any better, since the actual code in the ONEchip that does the modchip function is pretty much identical to the same code in Mayumi 4.

And the ONEchip boot ROM patch doesn't affect the disc region - that's entirely controlled by the mechacon CPU and with a SCPH-102 it will always need the "SCEE" boot string.
Top

Yep, the chirping noise is a problem of injecting the unlock code into the CD controller.
Every modchip has to do this to work.
So the fix to the issue would be to find a better injection point to solder to, or to use different components to try and reduce the issue.
Top

So, Mayumi and Multimode also didn't release pin 6? That sucks. I asked some people around with newer motherboard with modchips about that.
Top

damiank94 wrote: ↑
March 8th, 2019, 8:43 pm
So, Mayumi and Multimode also didn't release pin 6? That sucks. I asked some people around with newer motherboard with modchips about that.

I have no proof of this, but based on examination of the code I think the code that supports PU22/PU23/PSone in both MM3 and ONEchip was copied from Mayumi 4
Top

Okay, I've asked here and there and one guy told me that chirping also happened on american board so it was either Mayumi/MM3.


William Quade wrote: I remember someone else having issues with chirping noises (on an American PM-41 (2)) and after they replaced the pin 6 capacitor with a new one the noise went away.They might have also used a thicker wire. I also found some forum threads where people mentioned using the other side of the pin 6 capacitor fixed the issue, and others saying using one of the other resistors next to pin 3 fixed the issue

Unfortunately my board don't "see" discs so I can't check if this help or not.
BTW I bought another console with older board. I've checked pin 6 voltage on working board and it have ~1.7v (or mV, I don't remember). Not working board have something around ~1.1v. Could this be cause of not "seeing" disc?
Top

Okay, I have modchip inside of PSone with older board. Does wire lenght matter only for booting, or it could affect also reading disc during game? Also it's stealth install. 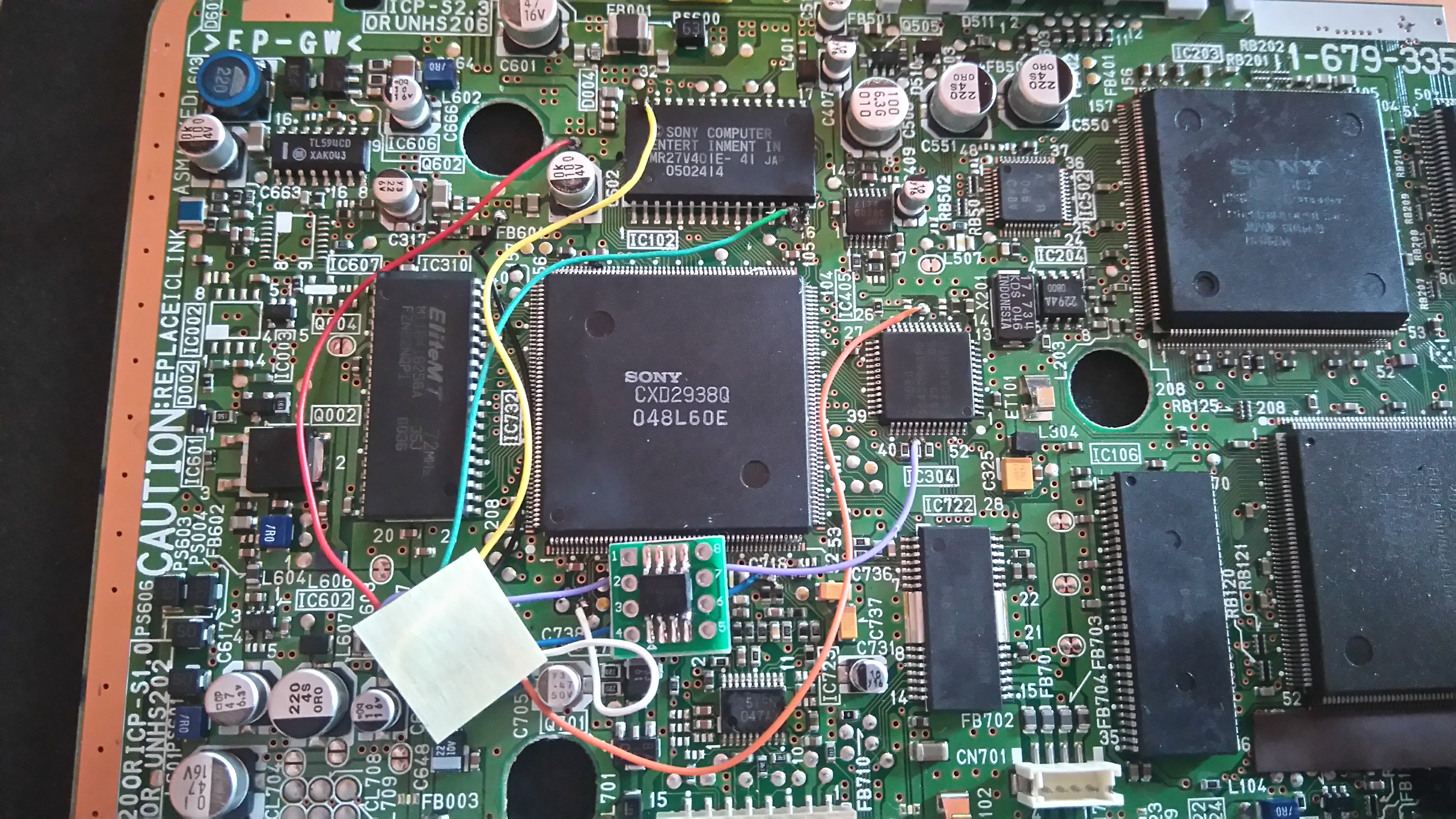 It's not beautiful, but it works. The thing is, I have a feeling that it struggles a little more with discs than before.

Also, could someone tell me which PIN in ONEchip what exactly is doing (and which one could really affect reading discs)?

Placing the chip like that green one, is good idea (to shorten wires as much as possible)?
Top

damiank94 wrote: ↑
March 17th, 2019, 8:59 am
Okay, I have modchip inside of PSone with older board. Does wire lenght matter only for booting, or it could affect also reading disc during game? Also it's stealth install.

It's not beautiful, but it works. The thing is, I have a feeling that it struggles a little more with discs than before.

Also, could someone tell me which PIN in ONEchip what exactly is doing (and which one could really affect reading discs)?

Placing the chip like that green one, is good idea (to shorten wires as much as possible)?

Generally speaking short wires are better since they are less likely to either pick up or generate interference.

The pins on the OneChip have the following functions:

6 is the most critical one - any noise picked up on this wire will be directly injected into the tracking servo.

It's normal for any chip wired to a later (PU-22, PU-23, PM-41) machine to degrade the performance of the tracking servo to some extent - but the extent varies between models.
Top

Hey TriMesh, thanks for the answer. Is it good idea to place modchip like that green one so pin 6 wire would be really short? At first I wanted to place modchip on CXD2938Q but it's too high and shield wasn't fitting.

BTW, wire isolation have any impact on possibility of signal interference?
Top

damiank94:
The matter of signal quality has many aspects to it, so it is hard to give a definite answer to your questions.
As the quote from William Quade says, it isn't even fully understood with veteran modders (probably for lack of time / interest, they haven't looked into it more).

I can give you some general tips that will help:
- put a local bypass capacitor on your modchip, around 100nF will be best (between Vcc and GND)
- keep the modchip's GND wire very short, and if you can, use a Vcc source that is close to that GND (minimize the current loop for the modchip)
- keep all other wires reasonably short and keep the point 6 data wire away from the RAM chip (IC310)

Basically, the position in your picture is almost good.
Just move the chip a little more towards the RAM chip, so all wires stay clear of the small RF amplifier chip (IC723).
Then shorten the GND and/or VCC wires by using more local power.
The rest is fine.

If you still get noises from the laser afterwards, you can at least be sure that it's down to the point 6 injection alone.
It would probably work better with maybe a resistor in series or a capacitor in series even, but that needs to be investigated by someone.
Top

I think the position you have the chip is fine - the problem is that the PM-41(2) is known to be extremely sensitive. As rama said, sometimes adding decoupling to the cap helps - you can also try adding a cap (say another 0.1uF) in series with pin 6 to act as a DC block. Sometimes that helps, sometimes it does nothing at all and sometimes it actually makes things worse.
Top

It's looks more like a problem with Taiyo Yuden disc - lol. Sony Lead Data/MBI and Ritek discs works better. Anyway thanks for clarifying and help.

damiank94 wrote: ↑
March 19th, 2019, 4:42 am
It's looks more like a problem with Taiyo Yuden disc - lol. Sony Lead Data/MBI and Ritek discs works better. Anyway thanks for clarifying and help.

Did you have the drive cover open when the console was turned on? I think the Onechip disables itself if you do that.
Top

Oh, so it's looks like it. There's no problem when open and close lid while ingame, so I guess You're right. Thanks again.
Top

I am also well aware of the PSOne PM41(2) chirping issues, however, i discovered that no matter what modchip you will use it will still make that sound (as others have suggested). Then i started experimenting and found out that for me, adding a diode to the line of pin 6 fixed the issue, however it was found from a lot of experimenting with different components (diodes, resistors, capacitors) and for me diode worked the best however different diodes had different results. As far as i remember though, this specific console with the diode fix now works very good, without chirping and reads most of the discs as any other modchipped console will do (and bare in mind, im talking about discs that are not Taiyo Yuden or other well known good CD manufacturer).

Here is a picture of the mod i did: 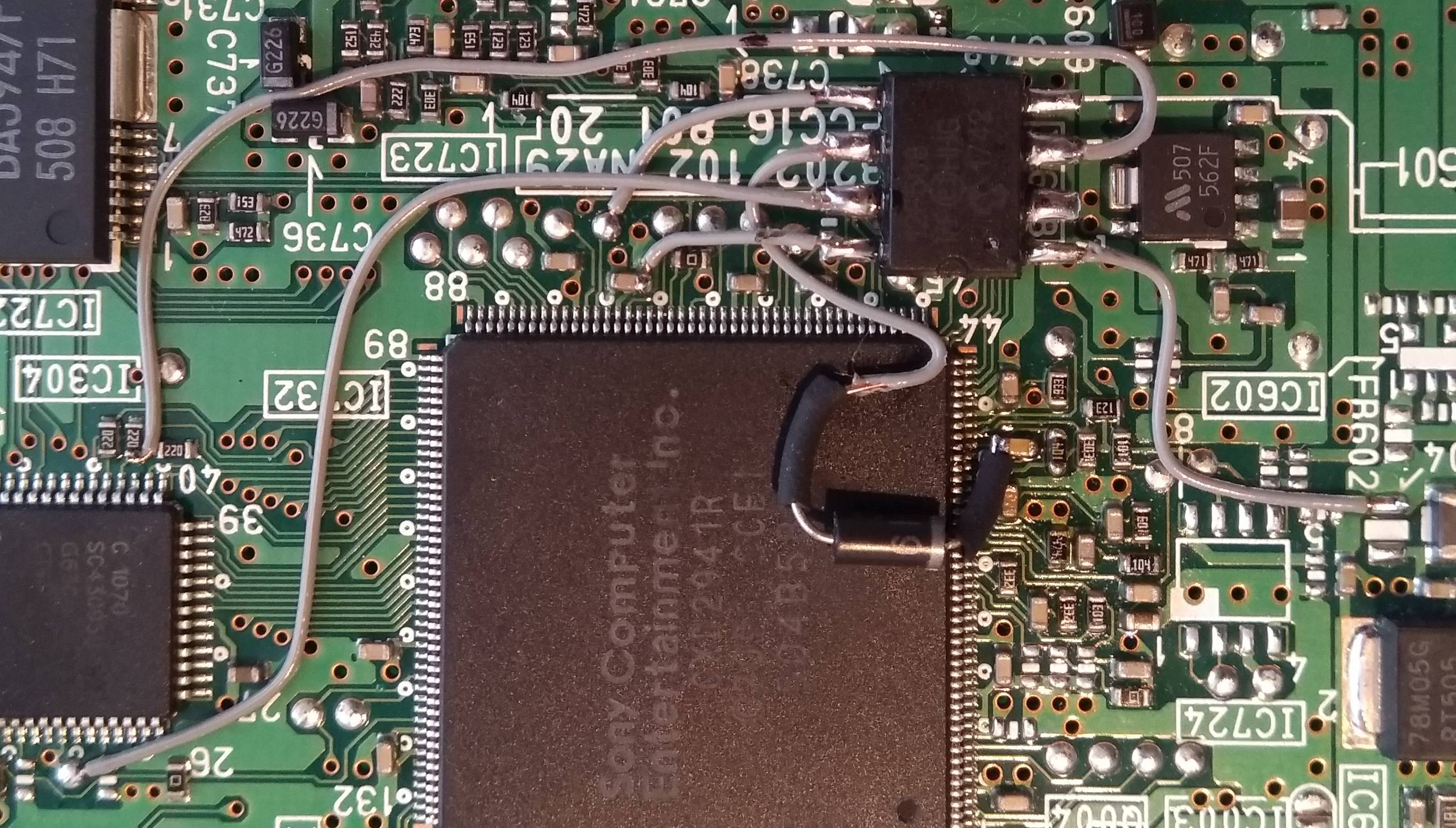 However i'm not saying that this will fix chirping issues for everybody, but i do advise to experiment with some components on that line, because it does help with the chirping but a lot times you just have to find a right balance between the chirping being gone and the consoles ability to still read discs (i had to try multiple diodes, till i found the one that worked the best). Resistors also worked, but not as good as a diode atleast from my experimenting with them, and for me (as far as i remember) adding a capcitor in that line did absolutely nothing other than braking the circuit.
Top

Did You tried Mayumi also? Does it chirp during boot and after?