Downloadable items posted by PSXDEV members are within this forum.
Post Reply
596 posts

montiel: prod me on discord, lol

I have in another GameShark the no cash bios and it boot o.k

Edit it work in fast boot mode(pressing R1 directly at boot) , but not in normal mode.

thanks tic, next version will fix this!
Top

I had issues with two games, both of which are redump verified. Gundam Battle Assault 2 (USA) hangs during fastboot and has an infinite black screen when doing a normal boot. Using an Action Replay disc allowed the game to boot normally. Robotron X (USA) would hang during the developer credits splash screen after the Williams/Midway logo, but would boot normally using fastboot.

Thanks so much!
Top

Just noticed a new third party memory card coming out soon for PS1. It's called the MemCard Pro (from 8BitMods) and apparently be able to store virtual memcard containers on a standard sd card. I was thinking once that's out and you get your hands on one, you can add support for dumping cart roms to memcard? This would be a viable path to getting stuff to PC without using cables and what not.

That should be fixed in the next version, I'll check those games are running alright!

Lol, finally an excuse to dump to memcards!
Yeah, alright, 8.0.E has a memory card manager and I have a beta unit, so I'll have a shot tomorrow
Can send a name like "romdump" to the card too, so this should be doable. (128k obvs)
Top

Can the green boot disc be used to boot ps1 import backups (in a manner similar to Breaker Pro / ps-x-change) in a slim PS2 as part of the ulaunch swap trick? Can the green disc be swapped in and then allow you to boot NTSC backups afterwards?

I ask because my PS1 doesn't have the parallel port so i am stuck with the swap trick on a slim ps2 scph-77003. Only PAL backups work at the moment (I am using a genuine Metal Gear Solid PAL as the trigger disc) despite psxlauncher claiming to boot imports (it doesn't as it freezes on the 'please press x' screen after the disc stops). Going back to ps2browser shows NTSC backups as PS1 discs, but when started the discs spin but the screen stays black. Same with ps1videomode negator.

If you're desparate you can sort of switch the disc out about a second after the PS1 logo shows and you're good.
(Don't look at the fucking laser) But you'll lose all the fancy features!
Top

Unirom's potential as a swap disc in PS2 slim

If you're desparate you can sort of switch the disc out about a second after the PS1 logo shows and you're good.
(Don't look at the fucking laser) But you'll lose all the fancy features!

I'm done with 'hard swapping' as it is damaging. I think as long as your green boot disc is registered as PAL by the PS2 it should work. I see no reason for it not to as it can't be coincidence that all my PAL backups work but none (bar Xflash) of the NTSC games do. Interestingly your Xflash CD from Unirom 6 is detected as an 'NTSC CD Rrom' by epsxe log file and yet that still boots fine. I wonder why. Something to do with the way the licence information was written in the ISO? If there is something I could be doing it would stop me from wasting so many CDRs.

I suppose I could always stick to PAL, but I want 60hz full speed. At least if I could swap in some kind of boot disc backup after the trigger disc I could enter PAL2NTSC codes afterwards I think. All the boot discs I find are registering as 'NTSC CD rom' in epsxe emulator so I don't think they'll work. I've even tried patching the boot discs using ASApatch, ZAPPER2K, p4u2k123. They either 'don't find the sequences' or say successful but the images are still showing as NTSC in epsxe.

* Just an edit relating to the glowing text. It turns out epsxe log screen is inaccurate. The Xflash iso that came with Unirom 6 is actually showing 'Sony Computer Entertainment Europe' in Xebra emulator: 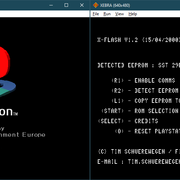 whereas the latest release of Unirom 8D is showing America: I notice that the release notes say the iso is green, but in Xebra emulator it is blue now. Intentional?
So it is indeed only Europe PAL copies that can be booted in a PAL/Europe slim PS2 using the swap trick. So Unirom boot disc version should work if it is PAL mastered.

The good news is that I changed the region of Unirom 8D to Europe using SetRegion PSX utility and now it is being booted by my slim PS2 after the ulaunch swap trick. The bad news is that that the disc doesn't stop spinning so there is no way to swap it in for an import backup other than to rip it off the spindle. None of the boot options in Unirom 8D (NTSC->PAL, PAL->NTSC or the NTSC -> JAP swap) work. If I un-sensor mod the PS2 then that dooesn't help either as the program says it doesn't recognise the disc any more (the PS2 is reset and can't read a copied disc). What I need is a way to stop the disc from spinning after the copy is swapped in without removing the sensor-mod.
Top

Hmm the mcpro is looking expensive. But DexDrives look to still be reletively cheap on Amazon (A PS1 memcard to serial port device with special software to transfer saves to PC). Supposedly the software for the device still work on modern OS but I have my trusty old Presario 486 with Win95 and an Compaq Armada m700 with Win98 on standby anyways so that's not an issue.

I'm curious how you'll handle memcard support. Will it be in a standard game save container or will be be a raw dump onto the card? I'm not sure how the DexDrive handles memory cards. If it can do a full raw dump of the card then it won't really matter how you store the rom dump I guess. But having it in standard game save container might be best for better compatiblity with a wider set of tools out there as in my case the MCPro is probably overkill for me given that I don't plan to have a very large collection of games to actively play on the PS1 that would warrant using modern SD cards.

How much space does a standard PS1 memory card have anyways? Surely it's at least 128k to 256k.

Oh and another idea is to use memcards as a storage medium for updating carts so I don't' have to burn CDs everytime there's an update to Unirom. Both DexDrive and McPro users could probably be able to use this too. So you can also read roms from carts and not just dump to them.

Graphics get garbled sometimes too
Top

So.. this I cannot believe

n I don't know who er what to blame >.< Something in Redump+patched that UniROM does not like?
Top

Ok got a DexDrive so now I can dump/read roms from Memory card once support for it is out. I'm pretty sure given that the MC Pro emulates real memory cards that the way you interact with memory cards will pretty much be the same between real ones and the emulated ones on MC Pro.

Voices keep freezing and they cannot finish in time
Top

My only question is. Is it supposed to be blue? Because mine ended up being green
Top

Looks like we can soon get Unirom booting from just a memory card. No game exploit or cart in the back required! Right now the github repo has support for the PSOne Slim. But the exploit should still exist in most of the older models so it's only a matter of time....

The only console it likely might not exist on is the launch model. The menu has a different look to it in those. But given the nature of the exploit...it looks like a mistake they made since launch since the PSOne Slim the last model they made had the exploit....
Top

Forget about Martian Gothic Unification SLUS-01148? Think that was an un-lucky first run tried the intro thrice in a row and it's good and this YT and on Xebra emulator makes the girl speech seem abrupt end too

Got vE now, Baby Universe runs but skippy tracks and then even the Playstation Developer DIsc working