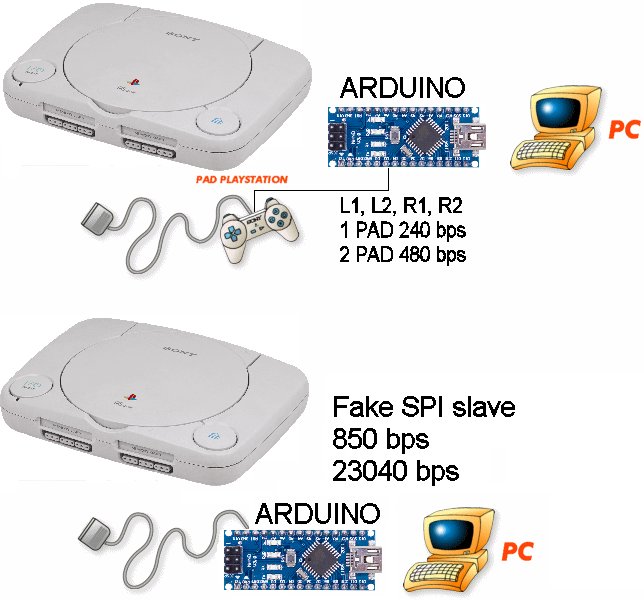 This project aims to send executables and data to the PSX RAM via the command port. All you need is an Arduino UNO, NANO.
Warning: The final speed must be divided, possibly by 2, since using an intermediate buffer to pass data from the EXE to the ARDUINO (maximum 115200 bauds), and from the ARDUINO to the PSX, the final speed is lower.


For testing purposes, the demo1.exe file is in memory to be compared with the data reading per series. If any data does not match, it gives ERROR. If we pass another file in the GENFRAME, when comparing it will give error.


40%
The project is divided into 2 sub-projects: Arduino Transistor Buffer 4 buttons

Successfully tested 20 KB (20428 bytes)of PsEXE, both with the RealTerm tool and with our own tool in Turbo Pascal 7 from DosBOX. The sending is extremely slow, using 4 buttons on the control (53 bauds), but it is safe, 100% without loss of synchronicity.
A text file is generated, which contains the sending of 7 bytes per line via usb serial port (9600 bauds).

The first 7 bytes contain the header, with the size of the PsEXE in bytes and the memory address.
Top

I set a new record with the ARDUINO (fake spi mode), namely 928 bauds at 58 fps NTSC. I used the analog mode sending 16 bits. In each stick, instead of sending one byte, I send 1 nibble, since there is overlap in the communications. As I have commented, all these solutions, prevent us to achieve the maximum speed, but that does not prevent that we cannot take out utility from it using our imagination.

From now on, I will make several separate programs for Arduino of each speed, since although the code is simple, it is starting to grow with many combinations, and since repetitive code routines are required for the exact times, better to have separate codes so as not to mess up (analog mode, digital mode, speeds, flanks). The user will compile the one he needs according to the speed he wants to try.
When you add another port and the multitap emulation, if it keeps growing like this, it will be very difficult to maintain.

In the meantime, I also continue with the EXE loader from memory cards. In 2008, I created a loader, which allowed me to load EXE's that were larger than the capacity of a memory (120 KB). The PSX asked us to change each card as if it were a floppy disk. I had developed it to walk around at home, so we had to change code on the fly to use it. I'm modifying it so that a normal user can use it. You can even use it from ANDROID.

And another new record.
I got 1856 baud at 58 fps with speed mode 11. I have given it a twist, and I have managed to pack in the 4 byte analog mode. It's quite confusing to explain, but basically, as the bit 7 of the sticks gives problems, I've left it unused, allowing to use the 3 bits of the high part. Using also the 4 bits of the lower part of the buttons, as well as the 4 lower parts of each stick, gives us 32 usable bits, that is, 4 bytes.

I have been adjusting to use 60 fps, but sooner or later it gets out of sync, so for now, the maximum is 58 fps.

These days I've been having fun like a kid with new toys.
I've removed the check against the memory executable, so I can load whatever I want for testing (I haven't uploaded it to the repository).

I've been testing all the homebrew and demos from the demoscene with the cable at 1856 bauds.
Since it loads to memory, I have tested and it works with .psx files, the .exe compressed with Bytekiller, Crunchykiller, upx, blade libraries, psxsdk, psyq, etc...
Although it can be slow for demos from 200 KB onwards, thanks to the compressors, like the Bytekiller, you can leave the Paradox intro ( AVH's First PDX-Intro) from 159744 bytes to 69812 bytes, which means a loading time of 5 or 6 minutes. Although I've been testing to emulate a multitap to achieve more speed, I think it's time, to leave this path, since as the PSX BIOS overwrites the PAD messaging, also rare messages arrive, and frames are desynchronized. The effort applied regarding the speed improvement, doesn't compensate. Let's remember, that for the moment, we already have, even if it's at 1856 bauds, a cable, that for intros and small projects, serves as a spare.

To achieve more speed, the time has come to migrate everything to PSXSDK for direct access to PADSIO and messaging.
I'm creating new messages, and testing with the PSXSDK, and so far they're going well.
We'll see how fast we can go.
Top

I throw a question to the forum, if you can help me.

In the psxsdk to send a custom message, it works perfectly:

However, in the psyq, it doesn't work.
I've managed to make it work, but by setting a timeout:

To clarify, I've removed all access to the memory cards, and pads. Only the custom message is sent. I have started listening to the SPI (logic analyzer) port, and I only send and receive the data I send.

Why is that?
Top

Wow , it seem that you are having a hard work, congratulation sir, nice to see you around here. Salu2 amigo.
Top

In the end, after many, many, many years, I set out, as I told you, to finish projects I had started from PSX. The truth is that what takes more, are the field tests, because I begin to make tests, and the results, sometimes are good and sometimes bad, and it is necessary to make changes. There's still a lot to do to make it comfortable for the end user, but I'm leaving the code so that anyone can do what they want and improve it.

I think it was about time to have a cable to be able to program a PSX in a comfortable way without even having to solder and with components to walk around the house, like an ARDUINO.
Top

Bye bye RealTerm and Windows.
I have finished the SEND utility, which is similar in operation to the REALTERM, but working in DOSBOX.
It is required to edit the DOSBOX configuration file.

I am creating a charger for speeds 12 to 25, selectable from a PAD controller connected to port 1 or 2. I also allow to choose the ARDUINO connected to port 1 and 2.
Since you cannot have both the control and the ARDUINO at the same time, by sharing SPI, when selecting the speed, you can detect the disconnection of the control, or you can give it 10 seconds to disconnect.
It is also possible to restart the charger by jumping to the PSXSerial, or restart the program.

This charger will serve as a test to see which speed is the most suitable, and then a version with the specified speed will be recompiled.
Top