General information to do with the PlayStation 1 Hardware. Including modchips, pinouts, rare or obscure development equipment, etc.
Post Reply
6 posts • Page 1 of 1

I recently bought a PS1 scph-1001 with PU-8 motherboard V 1-658-467-22. I just installed a modchip, and the spindle automatically spins at poweron even if the tray isn't down. I went and re flowed the joints and everything seems to be connected just fine. Yet, it still spins, it'll read a game.

I followed this diagram 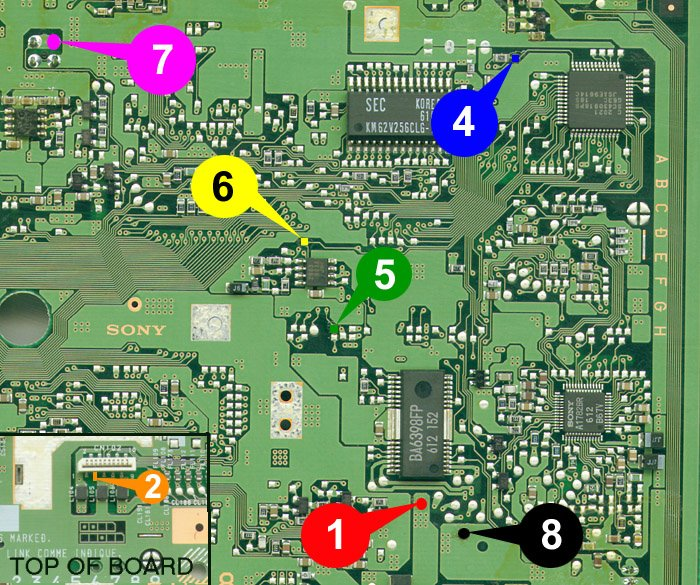 Any idea what I did wrong? I can't find something that matches that exact model but the points and everything seems to match up with the photo.

Not sure if this line is a typo or not "Yet, it still spins, it'll read a game." but is it actually reading any games? Originals, imports or backups/homebrew?
Buy and sell Bitcoins:
https://localbitcoins.com/?ch=rkv4
Top

likeabaus wrote: ↑
April 29th, 2018, 10:48 pm
Not sure if this line is a typo or not "Yet, it still spins, it'll read a game." but is it actually reading any games? Originals, imports or backups/homebrew?

It reads backups/originals, but it spins continuously unless I unsolder the 8th wire then it stops. Any idea? I thought perhaps I got the wrong schematics
Top

It is the wrong install diagram - that's for the "Stealth 2.x" series of chips. On the PU-8, the MM3 does not support full stealth and is normally installed in 4-wire mode with only pins 1, 5, 6 and 8 connected - all of which go to the same places as the corresponding pin numbers on the stealth 2.x series chips (which explains why it's working).

So try disconnecting pins 2, 4 and 7 and see if it works then - note that you won't get stealth mode on that board using that chip.

Definitely you should disconnect pin 2 - that's an input on the Stealth 2.x chips (used to detect pad activity and shut the chip down), but it's an output (for an optional LED activity indicator) on the MM3 - so that wiring is shorting two outputs that might be trying to pull in opposite directions together, which is bad.

The other pins (7 = Door switch, 4 = reset) shouldn't cause any problems, but serve no useful function in non-stealth mode.
Top
Post Reply
6 posts • Page 1 of 1

Users browsing this forum: No registered users and 4 guests