Post a topic about yourself to let others know your skills, hobbies, etc.
Post Reply
10 posts • Page 1 of 1

Hello! New member here.
I have had this memory card for a long time and always have been curious about this issue but having absolutely nobody to talk about it. I once tried to register at Assembler games but did not succeed. Anyway, here is a picture of one of my memory cards, having 17 blocks of data on it instead of the usual max 15. 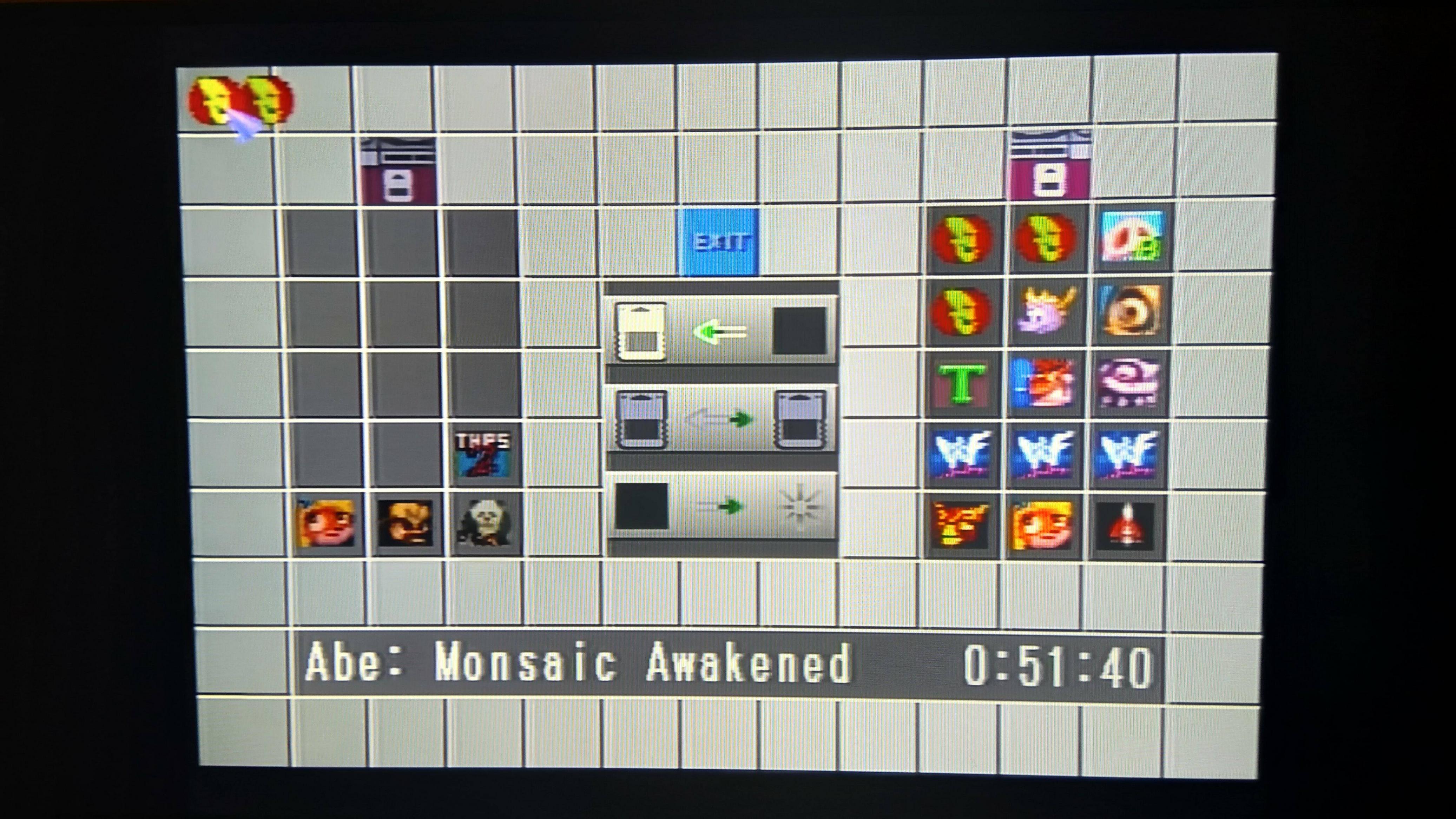 As you can see the memory card plugged in port 2 has 2 more blocks of Abe's Oddysee (i believe) and they just float on the top left screen. I can select them normally and they show valid data info on the bottom as you can see in the picture. I think this picture was taken on a SCPH-550x console, however i can add that this happens on every single revision, 900x, 700x, slim and so on. If i plug it in the port 1 the two extra blocks, pop in to memory card slot 2 (even though there is no memory card on slot 2 present). As of now i am not sure what happened if i plugged this card in 1 slot and another in slot 2 however if somone finds this interesting aswell i could test it as i still have the memory card present.

Some pictures i have (sorry for the bad quality, tried my best to get a decent ones some long time ago): 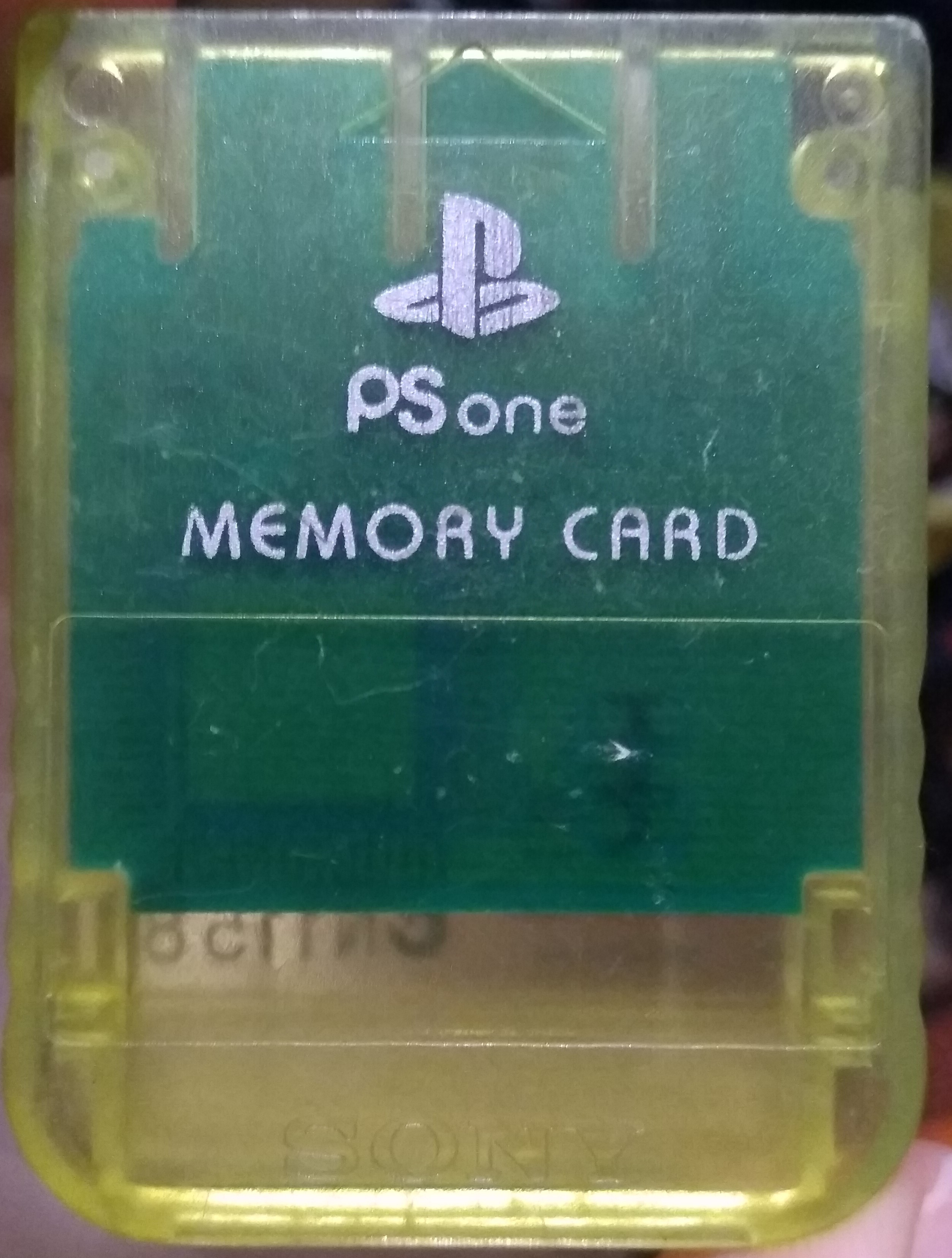 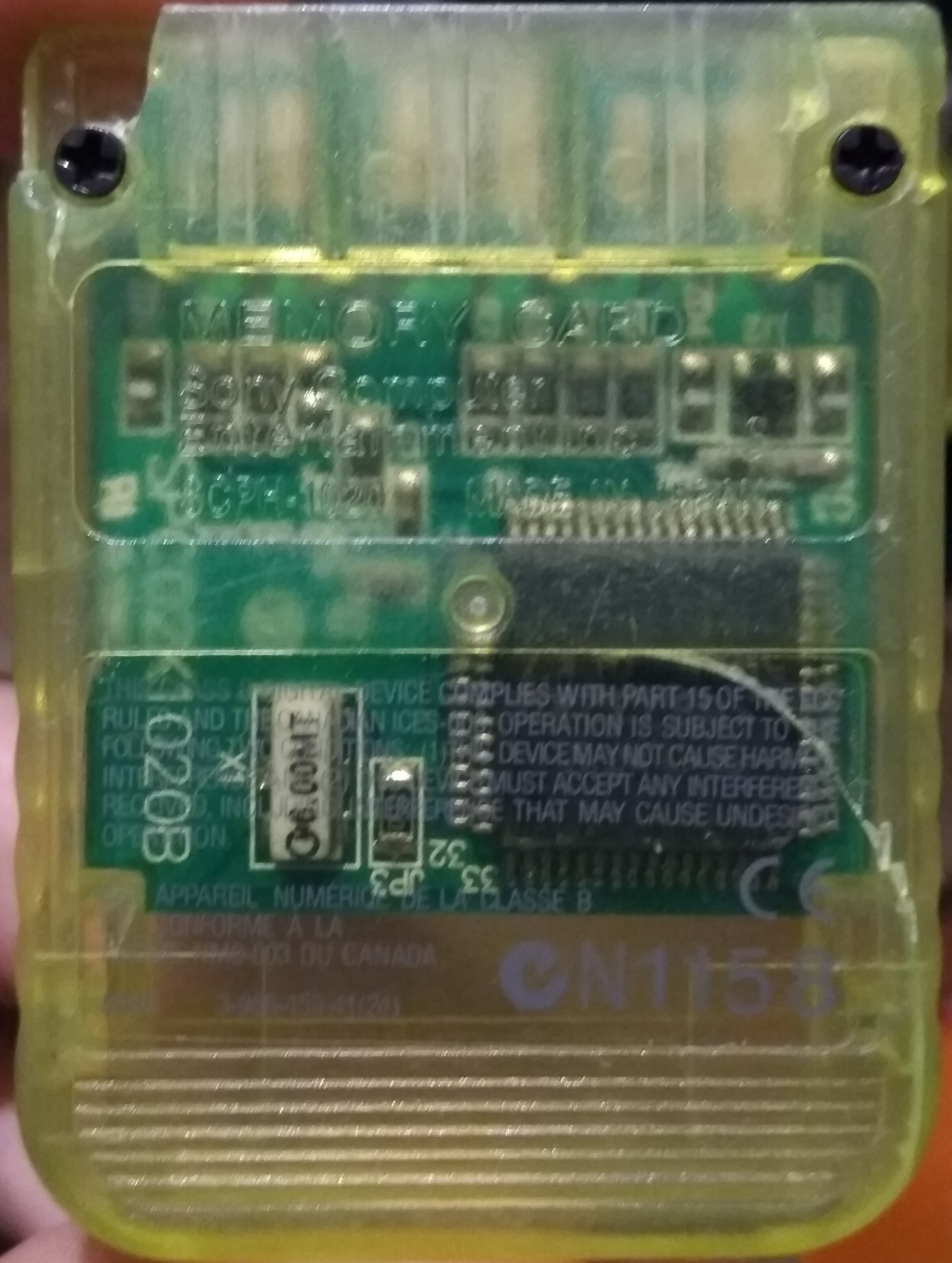 I must add that everything is happening in a PAL region

I would appreciate anyones opinion on this as i am quite curious of whats going on here!
Thanks!
Top

Never seen something like this before. I have a bootleg memcard than can switch slots when i press the SELECT+L1 (left) or SELECT+R1 (right), but this... This is something new for me o_o'
Top

The card is legit, you can see the typical Sony parts inside (and they're expensive, so cloners didn't use them).

I imagine there is some corruption in one of the saves, possibly that Abe's Odyssey one and possibly with the block link feature.
The Sony kernel libraries should prevent any memory card from ever using more than the maximum number of blocks.
Otherwise, we could have larger memory cards.. Would be nice ;p
Top

Can you actually fill more than 15 file entries on that card though?
Please don't forget to include my name if you share my work around. Credit where it is due.

Someone recently sent me a memory card save file with a Smackdown 2 save like I can see on your memory card.
My memory card reader tool saw this Smackdown 2 save as corrupted, and I wondered why, it's because I did very strict verification in my tool and I discovered that this Smackdown 2 save header tell that the save takes 1 block, where as in the memory card file system it takes 3 blocks.
Maybe that's why there was a corruption here ?
I wonder why sony let this mistake pass the final checks before release/production.
I also saw a Future Cop LAPD save with an incorrect save header, starting with "C\0" instead of the usual "SC".

If you could dump this memory card content using my tool and a PS3 memory card adapter, that would be great to analyze the actual data.
http://onorisoft.free.fr/psx/psx.htm

Anyway, that's an interesting case because, I always wondered if it could be possible to create an exploit on the PSX from a corrupted memory card save, so we could execute some special code, let's say to deactivate the CD protection with the nocash method.
Save exploit were often used on other consoles, I don't know if it has been used on the PSX ?
Retro game development on Playstation and other consoles http://orionsoft.free.fr/
Top

Thanks for all the responses, it is really interesting for me to read all your thoughts, especially knowing that you all know much more about how things work around PS1. I had a little bit of time on my hands and tried some experiments on the card.

First of all, replying to Orion_, unfortunately i don't have the PS3 memory card adapter as they are quite expensive (atleast for me) so i haven't bought it yet, but i have a PS2 with freeMCBoot, so i put the memory card in the PS2 (browser shows the same thing as on PS1) and launched uLaunchElf, went to the appropriate memory card slot and saw this: 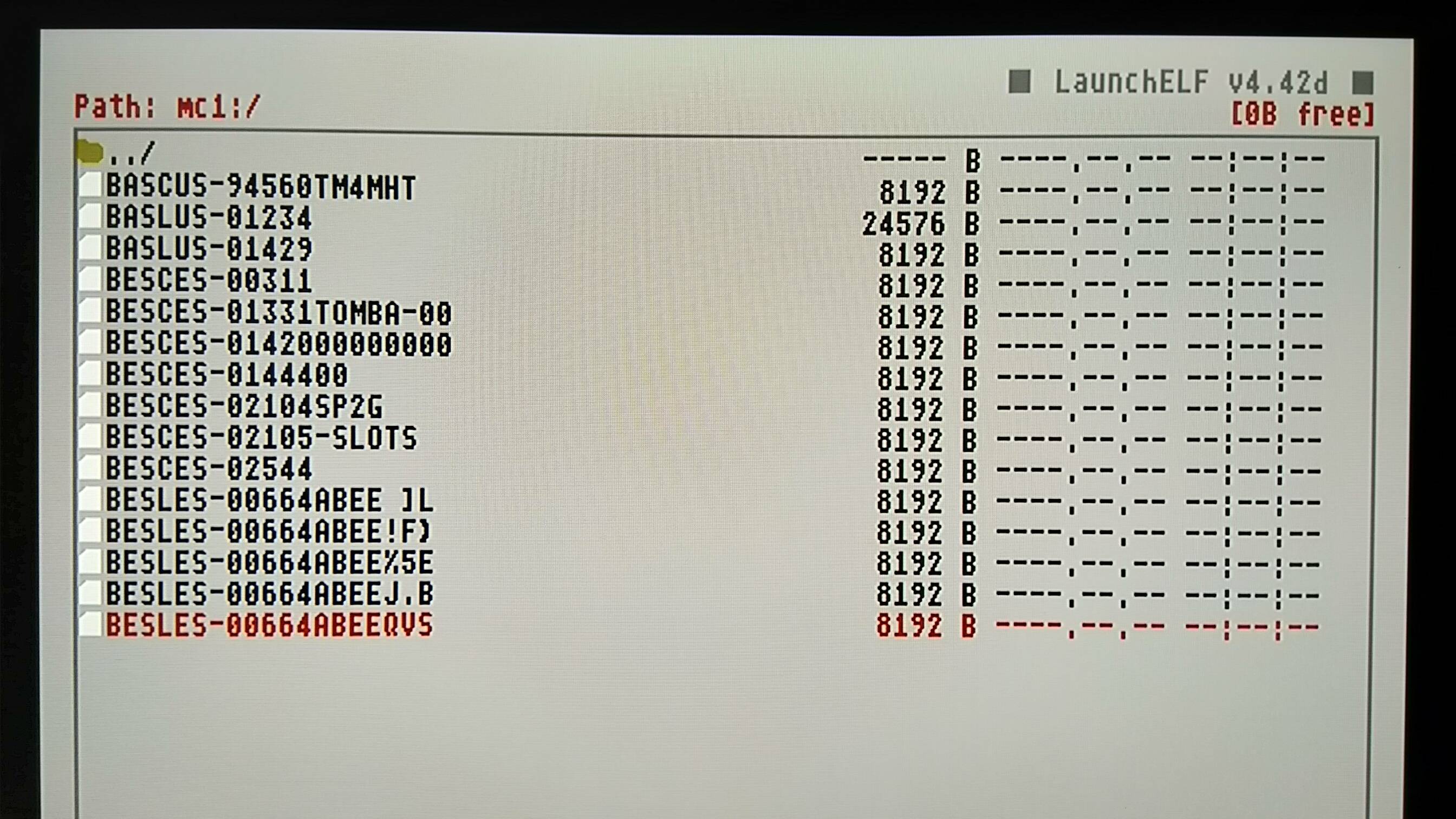 So this is quite interesting right? As the total space taken actually sums to 17 blocks correct? Anyway, i sort of ''analysed'' the data using a hex editor, and there are definitely files that are corrupted (atleast seems to me). For example, when i opened TOMBA save game, in hex editor there where strings left from Colin McRae Rally 2.0 (which, makes sense, because i think on this memory card used to be CMR 2.0 save aswell). Also when i opened the WWF 2 save, it had portions of Twisted Metal 4 Settings save on it, and i think when i opened Twisted Metal 4 Settings save it had portions of it missing, which, i guess are in the WWF save. Point being - things ar definitely corrupted in one way or another on this memory card.

For anyone wanting to check the saves themselves check the attachment below, containing all the saves in raw binary format (dumped using uLaunchElf - PS1 mc -> PS2 mc -> fat32 8gb flashdrive).
PSMC.zip
Anyway, here ar some of the experiments i did, to try and replicate the error or corruption on another original PS1 MC: Interesting note about the corrupted card and Abe's built in memory card manager - if i plug and unplug the memory card multiple times, i sometimes get an interesting screen on Abe's manager which doesnt load up the memory card fully till the end, showing some of the first saves and rest as empty and still allows to save. See picture below: 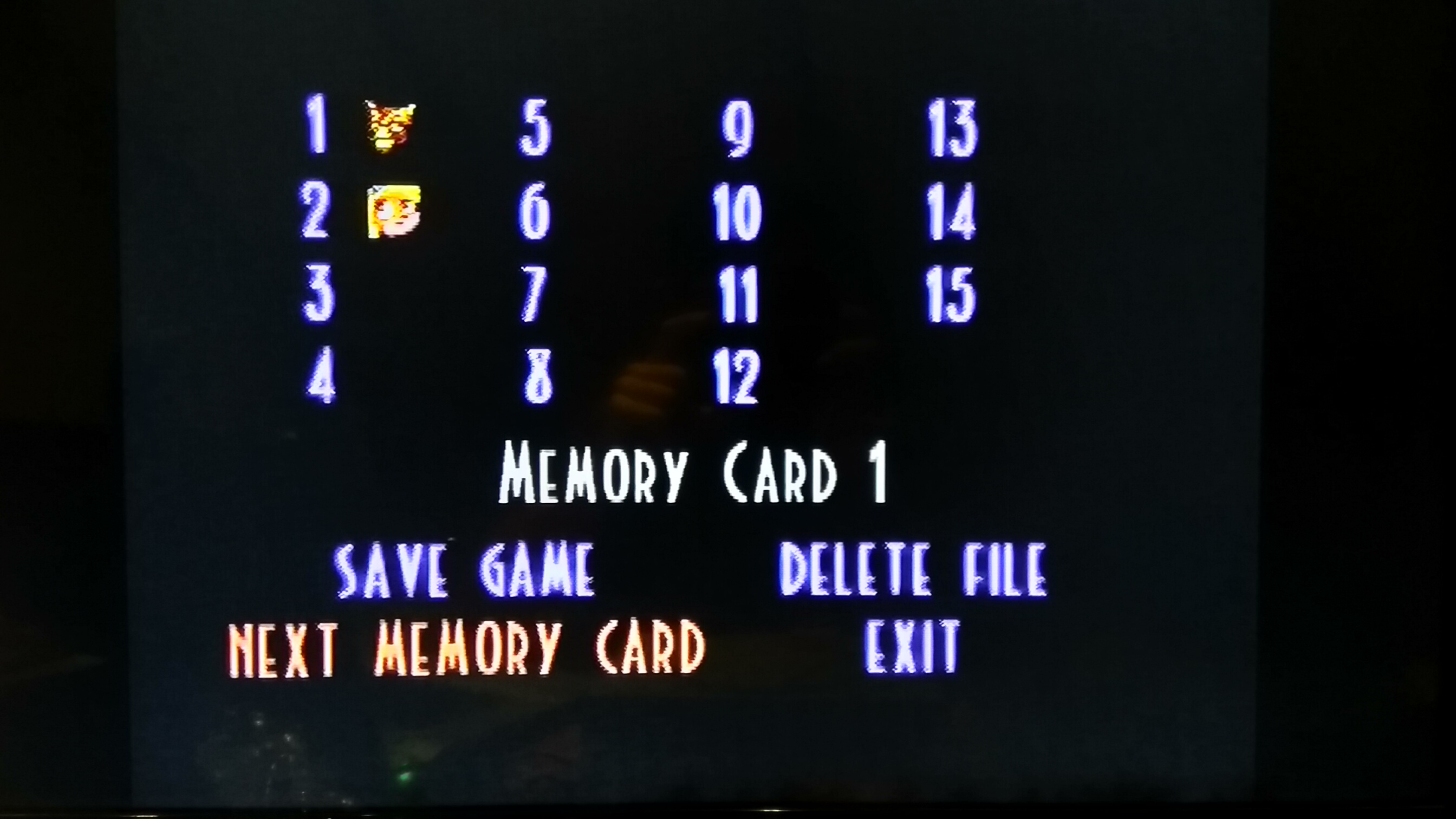 Now i had this bug happen multiple times (and the amount of saves it shows varies), but was quite scared to save because i didn't want to risk losing all data. However i do it several times again, and this time it loads till the 7th save, and i do press Save and for my suprise Abe's game shows Save successful. So i reset the console wishing to see an 18th block, only to realise Abe replaced my 7th save (which previously was MediEvil) with another Abe's Oddysee save (everything else left intact as it was before).

So yeah, thats all i did so far, if anybody has an idea as to what to do next leave a reply and ill try my best to do it. Here are some more interesting pics of what this memory card is doing that it is not supposed to do:
(corrupted one in slot 1, you can see the extra two now goes in slot 2, 1st and 2nd place) 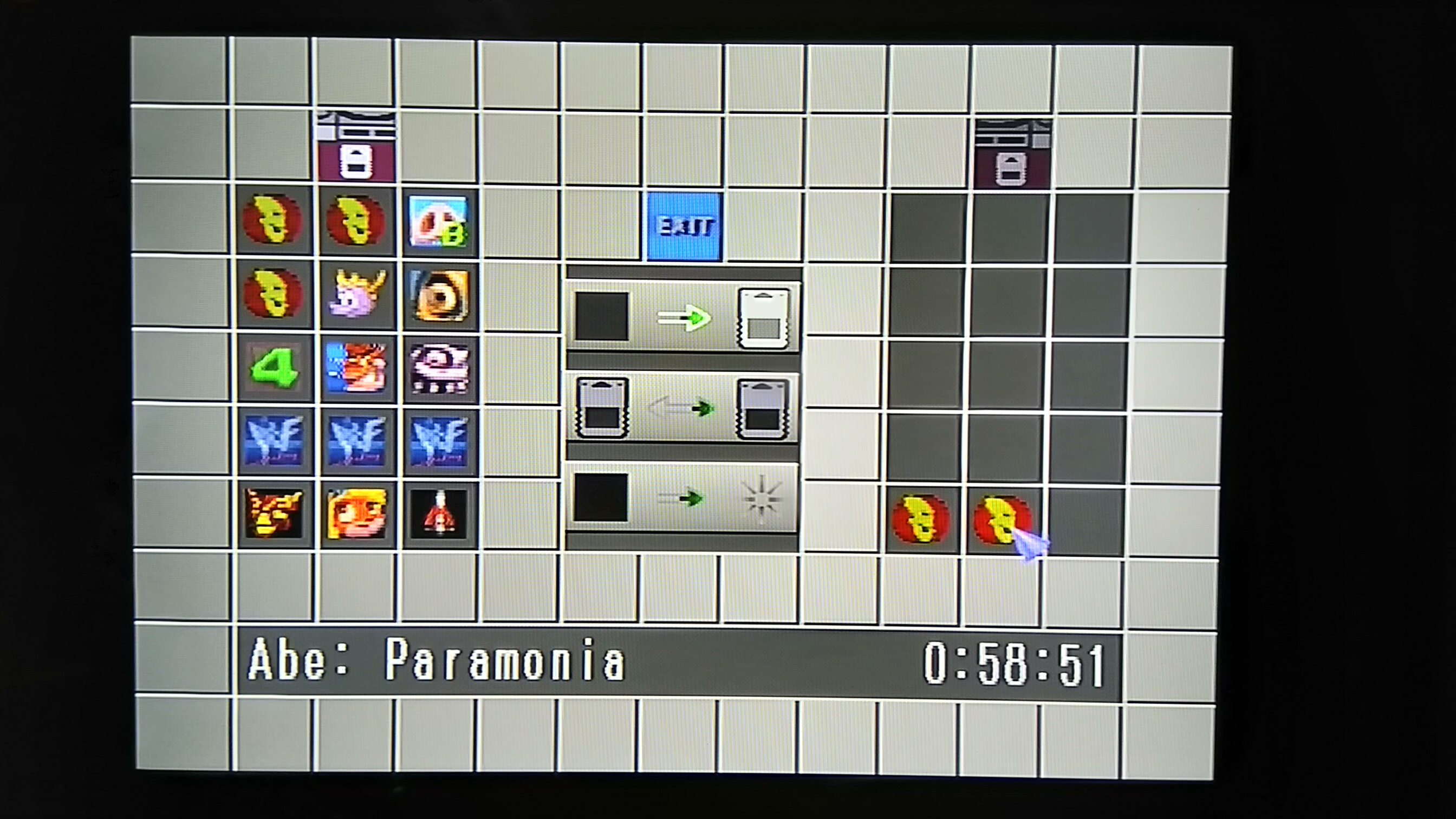 (corrupted one in slot 1, good one in slot 2, you can see the extra two icons now are replaced by MC2 WWF 2 save) 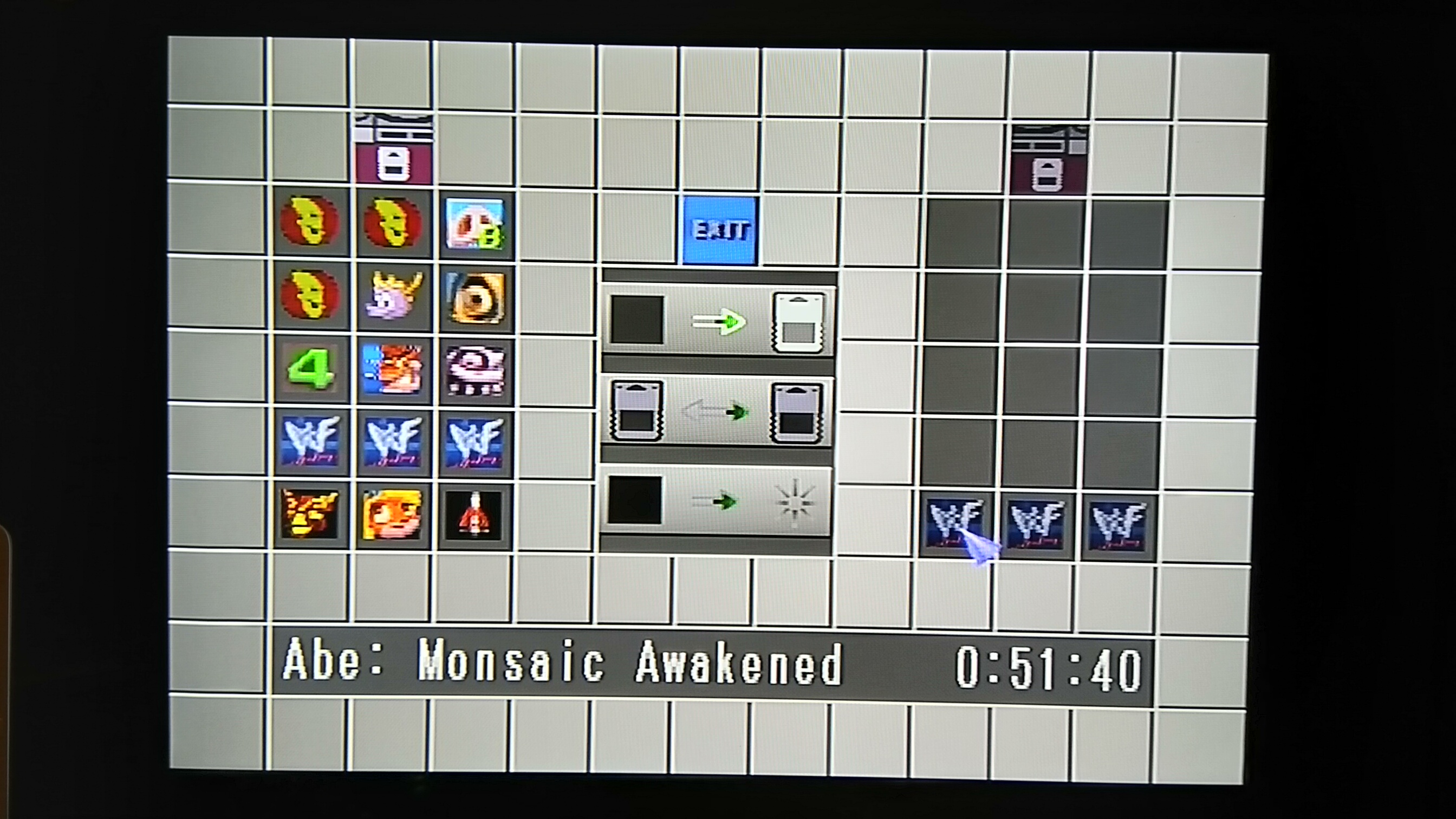 (arrow pointing to the middle of a linked block 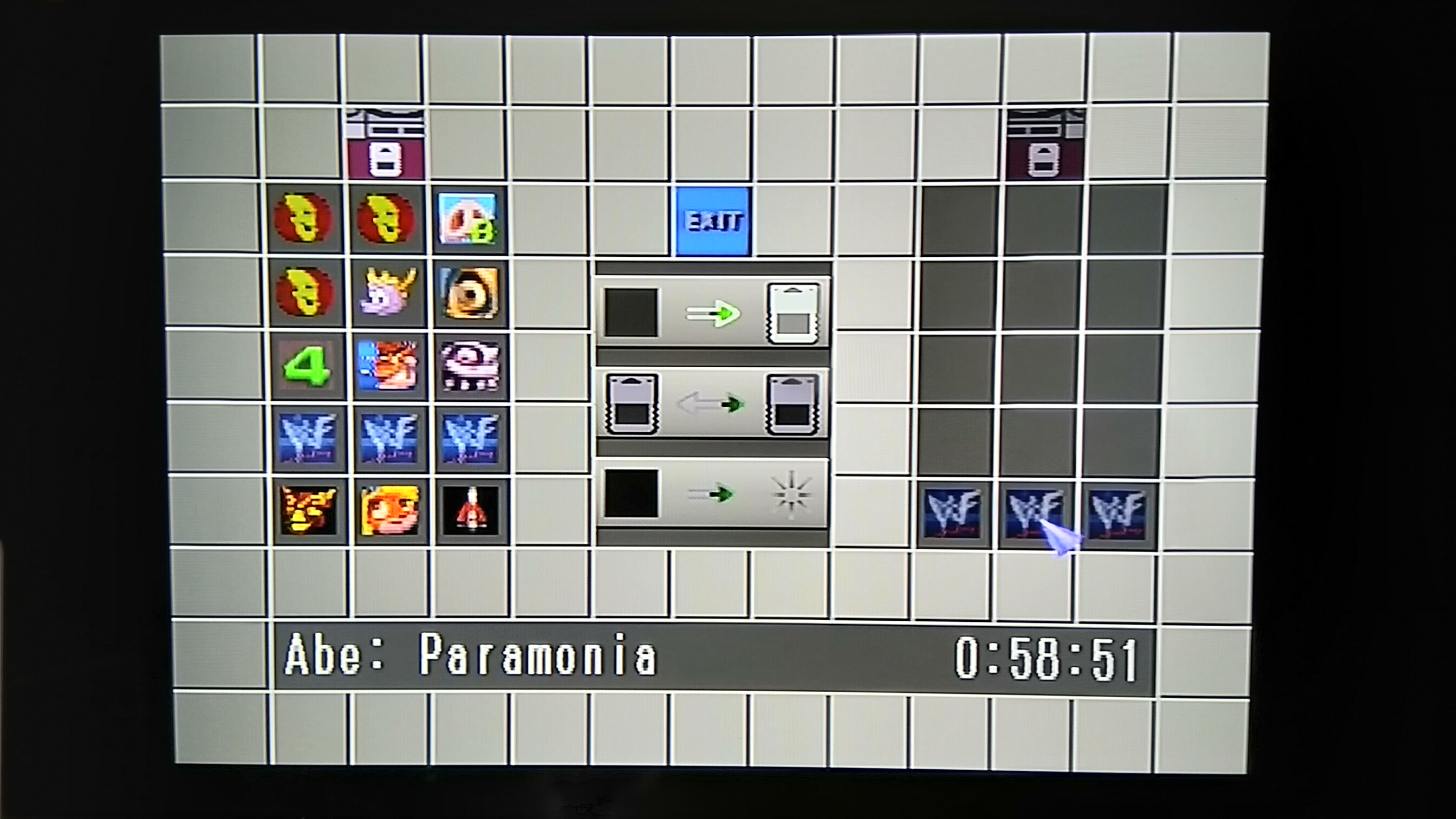 (the COPY animation, when 16th or 17th block is being copied to MC1)

I think for now, i will burn every missing game that has a save on that memory card and try every single save, to see what the game itself shows (corrupted save or something).

I compared the data of the files you posted and here is my finding.
The WWF 2 Smackdown (BASLUS-01234) save, which is 3 blocks, contains corrupted data.
The first block is correct, the second block is in fact a copy of the "BASCUS-94560TM4MHT" save.
and the third block is empty (zeroes)

And I think it's because the PS1 was fooled, as the WWF 2 Smackdown save header is incorrect, it says it only use 1 block in its "SC" header, but actually use 3 blocks in the MC File system.
I can't believe sony let this error pass the final check before commercial release.
Retro game development on Playstation and other consoles http://orionsoft.free.fr/
Top

There were a lot of things Sony let through before commercial release though, including the infamous 'malloc unable to free bug in the BIOS'.
Development Console: SCPH-5502 with 8MB RAM, MM3 Modchip, PAL 60 Colour Modification (for NTSC), PSIO Switch Board, DB-9 breakout headers for both RGB and Serial output and an Xplorer with CAETLA 0.34.

Yeah, the early days of the PSX were "fun" with all of these little gifts left by the developers... Anyways, I didn't know that there were non-PlayStation marked "official" memory cards, and that everything but the good old grey ones were bootlegs.
Top
Post Reply
10 posts • Page 1 of 1